I found these two photos at a flea market in Piney Flats TN.  I was told they came from an estate sale in Knoxville.  Both are of a man named Raymond S. Stripling. Here he is at age 2 (I believe he’s the one on the left):

The other, unnamed, kid seems to be commenting on something and Raymond appears to be gobsmacked by it.  I cleaned this picture, a Real Photo card, a little bit in Photoshop…it’s not been treated well.
Now, here’s Raymond at 13 with Wag, his dog: 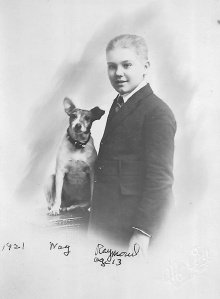 He’s a little stout and seems to have a lazy right eye.  The photo was taken by McCoy Photo Studio, 313 South Gay Street, Knoxville.
In the 1940 census, he’s still in Knoxville working as an auditor for TVA.  He’s married and his wife’s name is Alberta, also from Knoxville.