I found this at an antique mall in Kingsport TN.  It was taken around  the turn of the last century in Newburgh NY, on the Hudson River about 55 miles due north of New York City.  It was taken at Peck Studios on Water Street.  This photographic studio was established in 1860, about 30 years after photography became a known thing.  The boy (about 12 or 13, I think) is well dressed, his hands and fingernails are clean and he looks intelligent.  He’s had a recent growth spurt, as shown by the slightly short sleeves of his jacket.  His shoes seem too big, but that may have been to allow for growth.
The studio camera lens was none too sharp.  A 600 ppi scan shows a severe drop off in focus when expanded 200%.  I’ve applied a duplicate layer, set to overlay.  I have adjusted for levels and for mid-range lighting, and I cleaned up a few spots.  I then applied an all-purpose unsharp mask to tighten it up a bit.

The photo is in a gray, reed pattern, gate fold matte, with the name “Peck” in script and “Newburgh, N.Y.” in sanserif below the photograph.

I wonder what became of him. 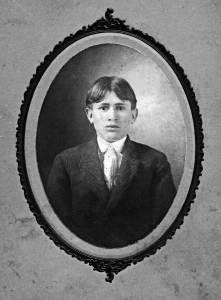 Uncle Dave looks a little…anxious, no?

Undated vintage studio photograph.  No studio name on the matte.  Moderately restored.
On the back is written in cursive, with what appears to be a ballpoint pen, “Uncle Dave Hartsell”.  Also on the back, also in cursive, in very light pencil, “Mrs. Mary Hartsell”.

From another studio photo, I saw that the “frame” on the matte was also used by “Cargille Johnson City Tenn.”.  Still no date range. 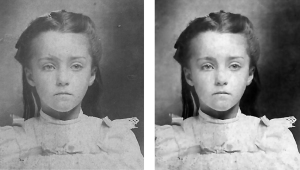 I was in Abingdon at a flea market.  Rummaging through some old cards and stuff, I came across a picture of a solemn young lady.  It was in a 3×4 inch art studio cardboard matte with “?Vamey’s? Art Studio, Bristol Tenn.” embossed on it.  The photo had been pretty badly handled; scuffed, stained.  Her hands were pretty much obliterated, so I scanned it at 600 dpi and then cropped it down to an h&s before I retouched it.  It took several hours over several days to get the result above.
When I was a kid, all of our furniture and nearly all of our family photos were stolen (I think I learned the phrase “those sorry sons of bitches” around that time).  I’ll never see them again.  I’ll also probably never know who this young lady was, but I have been able to bring her photograph back to some of its original form.  Photoshop rules. 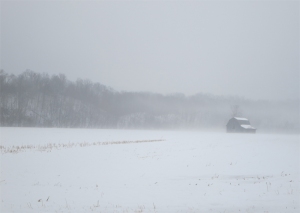 It wasn’t snowing, but it had earlier that morning and as the air turned a little warmer, a fog formed.  Hey, snow, barn, trees, fog.  Cut!  Print!