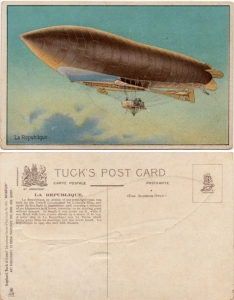 A pre-WWI Tuck & Sons postcard, printed in Saxony.
The image is a hand lithograph.

On the back, along the left side:

ART PUBLISHERS TO THEIR MAJESTIES THE KING AND QUEEN

LA REPUBLIQUE
La Republique, an airship of the semi-rigid type, was built for the French Government by Lebaudy Bros., and made its first flight in September, 1908, covering a distance of 200 kilometres in 6 1/2 hours, returning to its starting point without descent.  In length it was about 210 ft., while it was fitted with twin screws driven by a motor of 80 h.p.  A sister ship to La Republique was La Patrie, which broke away from its moorings and was never found.  La Republique in 1909 also met with disaster.