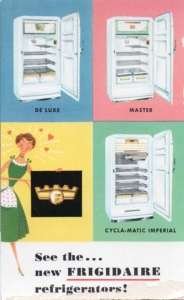 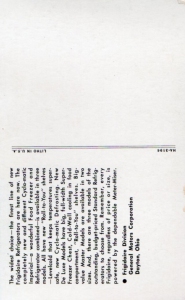 This is a Frigidaire promotional post card from around 1955.  Frigidaire, which began as a brand in 1916, is now owned by Electrolux. The range I bought about six months ago is a Frigidaire.  Heats rather than cools, though. 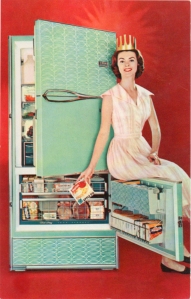 This card, with a real model instead of a cartoon character, is from 1959.  The new FROST-PROOF model, with the freezer compartment on the bottom, and in the infamous Avocado tone.   The two brand names I can determine in this screened image are Birdseye (began as General Seafood Corporation by Clarence Birdseye in 1923) and Morton (began in Louisville in 1940).  Since nothing in advertising is spontaneous, I suspect some deals got made.
Do not try this pose at home.
Y’know, I think she’s actually wearing that logo crown, which is intensified by the “sunburst” behind her head.  I wonder how long it took to set that shot up…