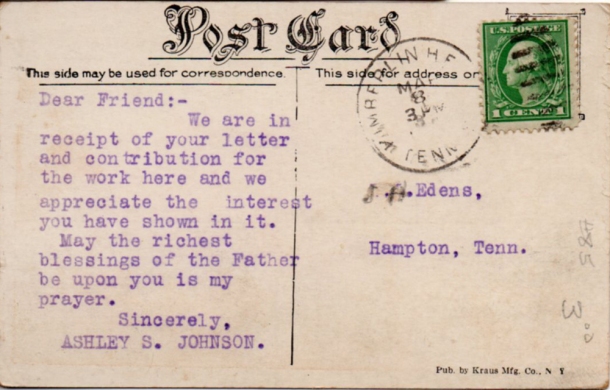 According to Tennessee Place Names, by Larry L. Miller (Indiana University Press), Kimberlin Heights got its name, eventually (1887), from Jacob Kimberlin, who mined lead in the area in the late 1700s.  In 1897, Ashley S. Johnson founded the School for Evangelists in Kimberlin Heights near the French Broad River.  He allowed the school to be named after him in 1909 and stayed as its head until his death in 1925.  As those of you who have used typewriters can attest, it’s difficult to type a post card on them.  This was nicely done.  The stamp isn’t any help in dating the card, since 1 cent postage covered a number of years.  Kraus Manufacturing of New York, the publisher of this card, was in business from 1912 to 1930.