Knoxville Train Stations (there were two?) 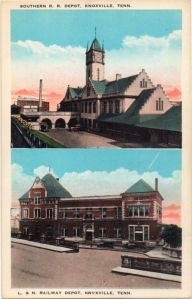 On the front of this postcard are the Southern station (top) and the L&N station.  The Southern station dates from 1903; the L&N from 1905. They’re both still sitting around in K-ville, but repurposed.  Passenger service persisted until around 1970.
The postcard is a Tichnor Duality Views, published by Standard News Co., Knoxville, Tenn, and dates from the 20s.  I don’t have a way to tie an inventory number to a date (there’s not much of anything about Tichnor Publishing Company – they were in Boston – on the web), but the cars look to be 20-ish.  It has to be from before 1945, since the clock tower on the Southern station was removed in that year.
I won’t say anything about the dealer writing his/her booth designation and price ON THE CARD.  Wouldn’t do any good.