RSS Feed
← Princess Ernestine
Too Good To Pass Up → 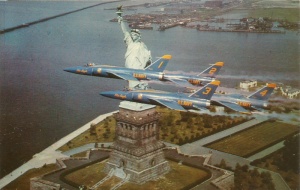 Here’s what’s on the verso:

The world’s first supersonic fighter-bomber to employ a “coke-bottle” shaped fuselage, Grumman’s F11F-1 Tiger carries the most modern armament and is currently in service with Navy fleet units all over the world.  Powered by a J65 axial-flow turbo-jet with afterburner, the Tiger was designed to fill the Navy’s need for a fast, hard-hitting aircraft with had the ability to carry the fight to the enemy’s  home ground.  The “coke-bottle”, or indented fuselage (area rule), provides the optimum drag characteristics at sonic speeds.  Like all Grumman planes, the Tiger is a reliable, easy to maintain aircraft – one of the major reasons the high flying “Blue Angels,” depicted in a back-to-back formation on this card, use the airplane.  The Blue Angels are the Navy’s precision flight demonstration team.  Since the team’s inception 13 years ago they have flown Grumman planes exclusively.

Note: the Blue Angels were formed in 1946.  “…13 years ago” would put this card at 1959.  Somebody lifted some boiler-plate without checking it…